14 October 2018
The Peoples’ Global Conference against IMF-World Bank Group (PGC) is a civil society and peoples’ movement-led conference organized in parallel to the official IMF-WBG Annual Meetings in Bali, Indonesia. The conference, which has attracted around 300 registrants from Indonesia and all over the world, seeks to discuss the impacts of IMF-World Bank's policies to people and communities, and their demands.

In September, the government of Indonesia announced an island-wide ban of all public events on the IMF-WBG Annual Meetings. The announcement is clearly a violation of peoples’ freedom of assembly and expression. The PGC was organized in the auditorium of the Radio Republik Indonesia (RRI), a private space. The venue’s deposit had been paid on 24th September and the contract with the management had been signed on the same date.

On Oct 10, 2018, the PGC national organizers received a message from the Radio Republic Indonesia management saying that the event had been cancelled because of lack of permit from the national police.

September 20: The Bali police issued an island-wide ban of all public events on the IMF-WBG Annual Meetings in Bali. The ban covered the period of 1 - 15 October 2018.

October 3: On Wednesday afternoon, the Bali Intelligence Police denied the local organizers the permit for the PGC in the RRI auditorium. Following which the RRI management sent a sudden advisory disallowing the use of the venue because of "urgent renovations."

October 8
AM: Several of the local organizers and volunteers individuals and residents reported receiving anonymous text messages against the PGC. The text messages warned the public from joining the PGC and accused the PGC as “anti-development”. The text messages were sent while several people's organizations held a rally at Bajra Sandhi Monument, Denpasar, Bali in time for the opening of the IMF-WB Annual Meeting. 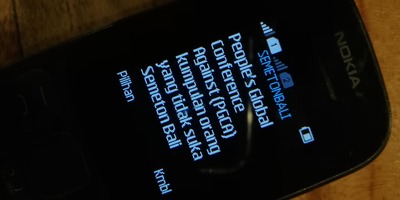 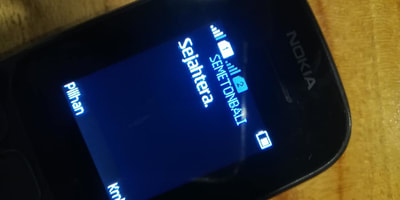 A malicious text message saying "The Peoples' Global Conference is a group of people who don't want prosperity for Bali" circulated in Monday morning through a text blast received by several individuals and residents. ​
PM: The PGC National Coordinators Kurniawan Sabar of INDIES and Helda Khasmy of Seruni and Bali Legal Aid Director Dewa Putu Adyana received another series of text messages from an anonymous number. The sender threatened that they were being monitored and admonished them to desist from holding the PGC. At the same time, PGC volunteers reported that hoax posters were being circulated in Bali, linking the PGC and its national organizing alliance such as Front Perjuangan Rakyat and Bali Legal Aid to illegal organizations with the intent of justifying the further repression against the conference and its organizers.
​
October 9
PGC submitted a notice to the Bali Police about the planned mass mobilization on Oct. 12 (opening of PGC) and on Oct. 14 (closing of PGC). The police informed the organizers of the PGC that they would now require a copy of the passports and identification documents of all the international delegates of the PGC.

October 10
AM: The management of Radio Republik Indonesia (RRI) Auditorium informed the PGC national organizers that they were cancelling the conference for the second time because the PGC "lacked permit from the National Police in Jakarta”, and that the organizers failed to “submit the names and copies of passports of the international delegates,” and that they “violated (unspecified) national government policies."

PM: Kurniawan Sabar of INDIES raised the issue of repressive measures against peoples’ movements and civil society in general, and the Peoples’ Global Conference in particular, at the CSO Town Hall session with IMF Managing Director Christine Lagarde and World Bank Group President Jim Yong Kim. Lagarde and Kim mentioned that they were aware of the PGC and had talked to the authorities. 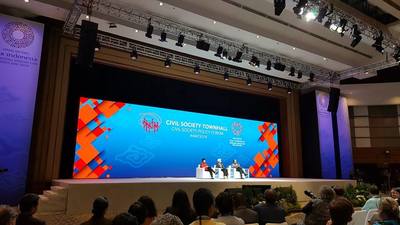 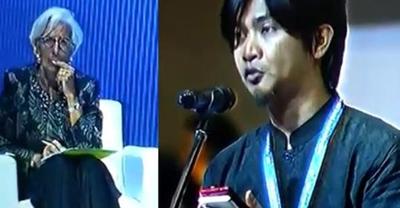 PGC organizers started negotiating with the marketing staff of Hotel Nirmala in an effort to find an alternative venue for the PGC the next day. Hotel Nirmala agreed to host the PGC. Payments were made with the Hotel Nirmala marketing team for the rental of the meeting rooms and food.

9:00: Local and international civil society groups gathered at a meeting room in Hotel Nirmala for a debriefing with the PGC organizers. Around 10 non-uniformed police personnel were seen roaming around the hotel lobby and outside.
11:00: PGC organizers and participants gathered in front of Hotel Nirmala for a quick rally and press conference. They were immediately shooed away by the hotel staff. Several Bali Intelligence Police officers were seen taking videos and pictures of participants without their consent.

Meanwhile, 6 West Papuans seeking to register for the IMF-World Bank Civil Society Policy Forum at Bali International Convention Center were denied entry. Furthermore, they were tailed and had their pictures taken by the police on their way out of BICC.
12:30 PM: Civil society groups at the Bali International Convention Center held a lightning rally denouncing Indonesia’s repressive measure of disallowing public actions and IMF-WBG role in the violation of peoples’ right to free speech and assembly. The IMF-World Bank representatives and the Indonesian National Security authorities offered the PGC national organizers an alternative hotel venue for the PGC, to be paid for by the IMF-World Bank and with the intelligence and police providing security for the PGC. The PGC national organizers rejected such offer, saying that their only demand was for the IMF-World Bank and the government of Indonesia to respect their right to free assembly and speech and leave the PGC alone. The decision of the PGC national organizers to maintain their independence and protect the integrity of the conference received overwhelming support from other national and international civil society and peoples’ organizations.
October 14
12:30 PM: The protest of the PGC in Nusa Dua, Bali was violently dispersed by the police.